When regarding violence, the question is never really whether or not the actual act of violence is justified, but how completely different those involved will become. Violence in and... When regarding violence, the question is never really whether or not the actual act of violence is justified, but how completely different those involved will become. Violence in and of itself is never what is feared or mourned over—it is the intensity of the effect that determines the caliber of violence. Violence has always been an unfortunate product of control, a desire for a specific outcome. Whether fully intended or realized, the act of violence in any scenario is a plot for control over the current status quo.

Contrary to their Arab Spring foils, the riots and lootings in London aren’t receiving the most overwhelming support from the world. Already, unfounded speculations about how and why the riots began have peppered mainstream and social media—the BBC has been accused of drawing the rioters as protesters, the Gaurdian  for claiming that the youth don’t respect their parents in plain print, and the American major media outlets, quite predictably, for being so completely full of shit it’s hard to even take away a granular piece of information.

The comparison is not apples to apples and whether you subscribe to civil disobedience or archaic unrest naturally comes into play. The successes of civil disobedience taught by Gandhi and Martin Luther King require restraint, practice and faith in the face of violence and chaos.

It also requires for someone to set the practice in motion and the rising climate of this phenomenally escalating desperation of urban poverty were lost instead to chaos. With a culture that perpetuates a level of excess and lack of restraint hereby unheard of before this day and age, it seems almost natural and predictable that the rioters of the UK practiced little to no restraint.

And that’s obviously said with a huge sense of regret.

For the most part, anything concerning the riots is so masked in arbitrary speculations about the youth generation, about the economy, and about the state of violence in the global world that it fails to even begin to address the most serious and most frightening consequence of the riots:

Nothingness. And nothingness, the powerful and unchanged status quo is what got us here in the first place. These “consumer society riots” are deep rooted in powerlessness and lack of control, all nurtured by the climates of this age. So this lack of real consequence and change is dangerous because it perpetuates that which has already happened–i.e. when this level of violence is rendered senseless and brushed off like some kind of teenage tantrum, there is only room for escalation and desperation in the future. 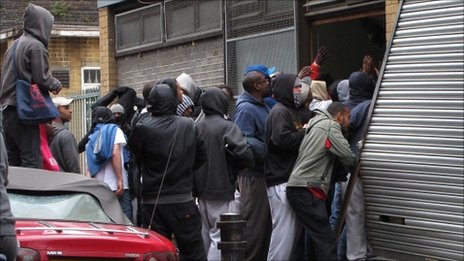 Whether or not you morally agree with violent protest (obviously, I don’t) has nothing to do with this. From the responses both British and American media have had to the riots has already confirmed the fact that the violence will be senseless—and that’s not because they were planned that way, but because no positive change will come of it. The media has completely stripped away the chance of positive change by using words like “youth” and boxing questions about the level of disrespect for authority or towards parents. 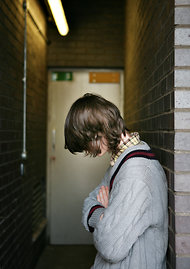 So no matter the method, any form of protest framed as “youth” will never change anything. It brings an otherness and a disconnect to readers. It places demographics (poor, young etc) onto ideas, stripping them entirely of any power—alienating any that don’t fit the demographic. It is a cop out and a distraction from the fact that there is unrest among what should rightfully be called its citizens.

Maybe that’s a bold statement. And maybe I don’t really know what I’m talking about but the response, intended or not, has rendered the whole thing completely useless. The path has now been polarized into two: a pattern of “senseless” and unfortunately useless spike of gimmick riots or a quick squabble to bullshit their way out of the situation the government wants to be free of blame for.

While I don’t ignore the tragedy of lives lost, both physically and those that lost homes/businesses, I can’t help but feel frustrated at the response. It happened. A point was sort of made (vaguely and irresponsibly) but instead of trying to deal with the matter, politicians and media pundits are just throwing their hands up trying to explain who is at fault.

It’s called a distraction. (Is Blackberry to blame?)

If it doesn’t seem eerily close to home yet—if you don’t feel connected to this event yet—let me just say it: Flash Mobs.

While the scale is currently much smaller, don’t fool yourself into thinking that Philadelphia is not rottingly ripe for something like this.

Philly Flash Mobs have left several people seriously injured over the past few weeks to a month—each of which have been reportedly orchestrated via email or social media.

Mayor Nuttter recently placed a curfew on Center City at 9p.m. for anyone under 18 years of age. They cannot be outside in Center City after 9p.m. as if barring the disillusioned, irrational “youth” from a specific geographic region could possible combat violence and powerlessness.

The curfew will remain at midnight for anyone under 18 for the remainder of the city. Additionally, the city’s largest recreation centers will start closing at 10p.m.. While most city officials agree that the violence is at least indirectly related to the fact that young people in Philadelphia have little to actually do but still calls the acts “senseless, stupid.”

Moreso than anything, I send my compassion and love to those hurt or otherwise affected by any kind of violent protest and as a result of that regret and tragedy I would only hope that especially locally, the powers at be would finally bring justice to these acts of violence in a manner that is genuinely positive and preventative.

This hapdash shrugging of our shoulders over the cries for attention from our nation’s “youth” are not senseless or stupid, they are a tragedy to our humanity and should be treated that way.

** I do not pretend to be an expert on violence or socio-economics. This post reflects merely my own reactions to the events. If I have offended you in any way, please feel free to contact me via email at [email protected] Peace and prosperity, friends.