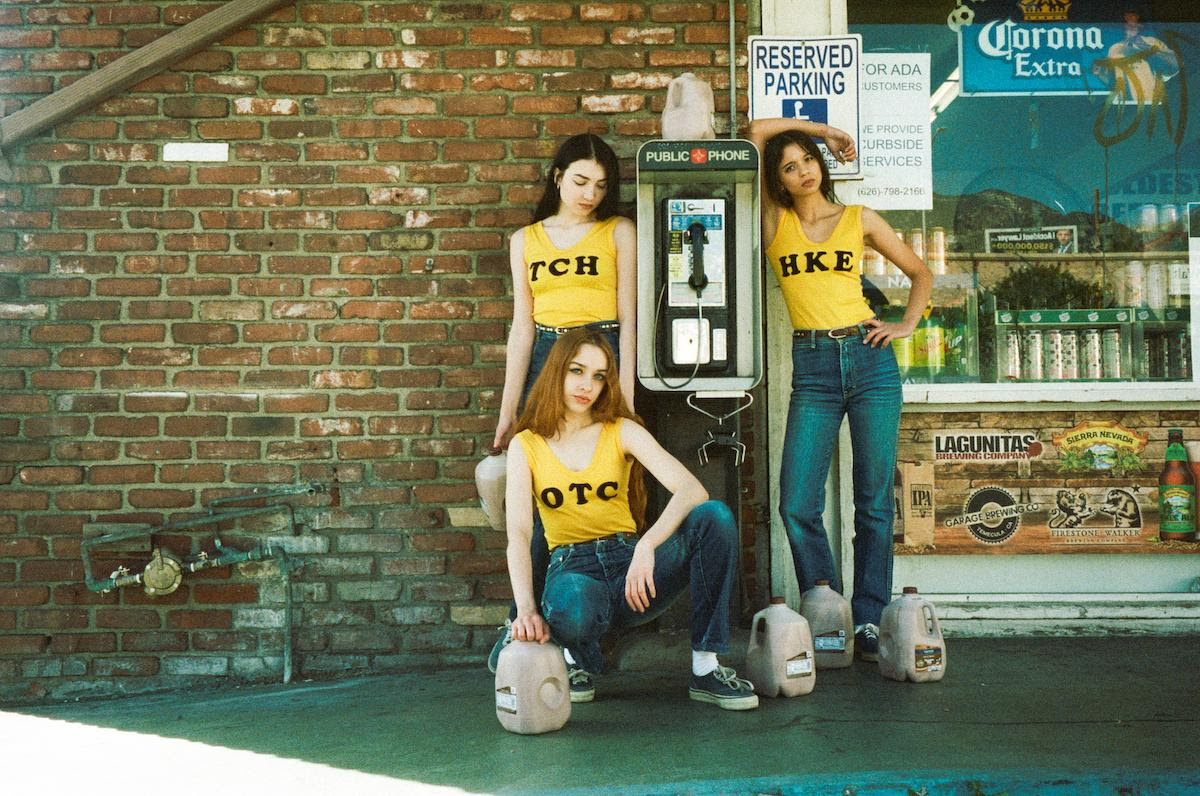 This Friday, May 13th, 4AD retro Rock N’ Rollers The Lemon Twigs will be headlining Underground Arts… But we’re even more excited about opening act, Tchotchke… Tchotchke are a...
by izzy May 9, 2022

This Friday, May 13th, 4AD retro Rock N’ Rollers The Lemon Twigs will be headlining Underground Arts… But we’re even more excited about opening act, Tchotchke… Tchotchke are a New York-based trio who kick out sunshine punk jams that would be right at home in a John Waters movie or in a headlining set at CBGB in ’77.  In addition to their current run supporting The Lemon Twigs, this summer will see the band hitting the road with BRONCHO for 23 dates, including a July 21st stop at Johnny Brenda’s, just one week after the release of their self-titled debut LP.  I recently got a chance to chat with Tchotchke about their roots.

Izzy Cihak: First off, how did you come up with your name?  I love it because it’s basically the word with the weirdest spelling I can think of.

Eva Chambers: We spent most of the lockdown trying to come up with a new band name.  ‘Tchotchke’ was on the first list of names we came up with, but were pretty reluctant to go with it since the spelling is so confusing.  Almost two years later we finally circled back to it and decided it felt the most like us.  Anastasia and I both have very large tchotchke collections.  We all got used to the spelling pretty quickly and hope others will too.

Izzy: Your self-titled debut album drops this summer.  What can be expected of the release, for those unfamiliar?  What were some of the album’s biggest inspirations, both musical and otherwise?

Anastasia Sanchez: These songs come in such variety that it’s hard to pinpoint our “genre.”  That being said, I wouldn’t want anyone to dive in with any expectations—We were just having fun writing whatever we wanted!  I would say our main inspiration was intense experiences of love and loss.

Izzy: Considering that the band is still relatively new, what have been some of the highlights of Tchotchke for you so far?

Emily Tooraen: The most noteworthy highlights of Tchotchke so far have included the great camaraderie that has continually grown between us, as well as getting to play some shows around New York.  The city is still a relatively new home for all of us and getting to focus on improving and enjoying the new songs in a new and lively environment feels like a very bright beginning.

Izzy: Is there anything that you think is especially important for fans and potential fans to know about you, whether relating to your backgrounds, your aim as artists, or just your process of making music together, or is it all in the music?

Eva: I think they should know how special Tchotchke is to us.  We always joke that we’re each other’s ‘musical soulmates,’ but it’s true!  Anastasia and I have stuck together through a couple of different bands/lineups over the years, but nothing ever felt totally right.  When we met Emily and played with her for the first time, we all knew we were onto something.  Even when we’re not doing band stuff, we’re hanging out constantly.

Anastasia: Excited to experience all the cities we haven’t been, especially Toronto and Montreal.  Of course we are always excited for Philly.

Izzy: What can be expected of the live show when you play here in the very near future at Underground Arts with The Lemon Twigs.

Emily: For the upcoming show at Underground Arts, I’d say you should prepare to hold on to your socks!  The Lemon Twigs are incredible musicians and friends.  It’s an honor to open for them and we aim to match their energy.

Izzy: I’m not sure if you know this, but the venue is in a neighborhood locals call Eraserhood, because it’s where David Lynch lived when he was in college and the neighborhood that inspired Eraserhead.  So, I’m curious if any of you are David Lynch fans?  And, if so, do you have any favorite works of his?

Eva: When I was in high school, I’d rewatch the entire Twin Peaks series every fall.  Blue Velvet is probably my favorite though.  My older sister got her name from Isabella Rossellini.

Izzy: Finally, on a related note, I really love your videos for “Dizzy” and “Don’t Hang Up On Me.”  From where do they take inspiration, or is it different with every video?

Emily: “Dizzy” was inspired by the idea of getting dizzy while fighting in a boxing ring… it seemed fitting for the theme of the song.  We watched Rocky the night before we filmed it for inspiration.  Hilla Eden filmed it on super 8 and really brought life to the match we envisioned.

Anastasia: “Don’t Hang Up On Me” was directed by our close friend, Stephanie Pia, who is probably my favorite photographer ever… I asked her to do a video for this song, and she just came up with the whole concept so quickly.  This was her first music video, and we shot the entire thing in a day (which happened to be on Emily’s birthday!) and my mom, Rainy, styled it.