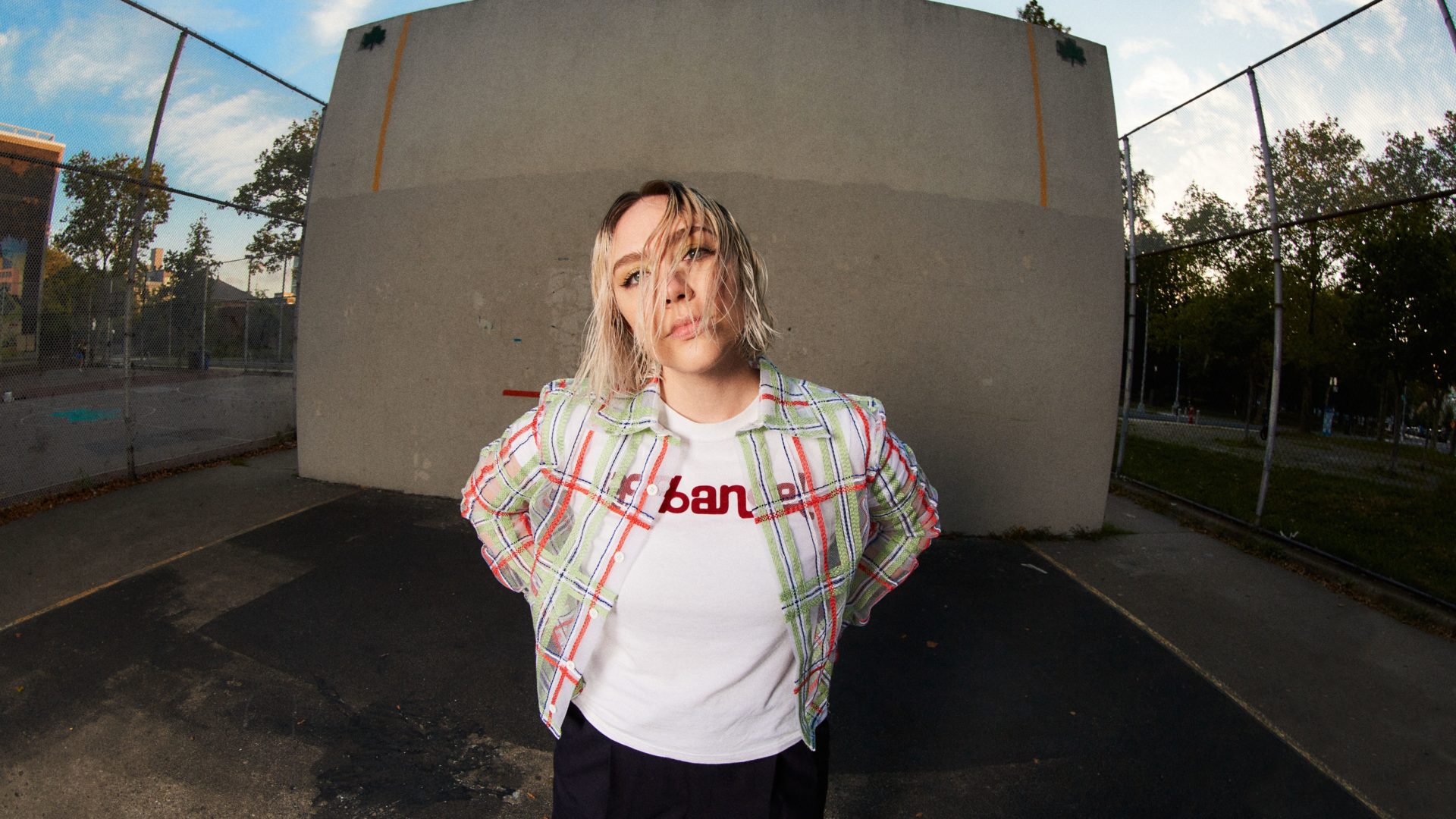 Upon seeing Jenna Kyle’s recent video for “Tell Me,” any former goth teen won’t be able to help conjuring comparisons to Depeche Mode’s Anton Corbijn collaborations.  The hyper-moody banger is equally suitable for midnight epiphanies and moderately-irresponsible nightclubbing.  And the accompanying music video, directed by Jay Harwood, has the electro-chanteuse striking poses in wearable high art from the likes of PJ Linden and Max Steiner while satirizing her frustrations with her “handlers.”  Like the ever melancholy and ever chic synth-poppers, “Tell Me” serves as both an emphatic critique and celebration of that which could be regarded as “style.”

“Tell Me” is the first single from Jenna Kyle’s upcoming debut EP, Ojos, out September 3rd.  Although this will be Kyle’s first official release, she’s been dropping singles since 2017, most of whose appeal toes the line between the electronic and left-of-center pop.  She’s drawn comparisons to BANKS and Tove Lo and, according to Paste Magazine, “Jenna Kyle exemplifies a new strand of ethereal R&B blended with Indie -Electronica to create thoughtful, emotive art pop.”  I recently got a chance to chat with Jenna about her origins and inspirations.

Izzy Cihak: I know you recently moved from New York to LA, after 10 years.  How has the transition been so far?  How do the two cities compare, as a musician?  Or are you still waiting for the pandemic to move on and things to go a little back to usual?

Jenna Kyle: Things are still definitely not back to normal for me quite yet. We’ve been pretty conservative with our COVID precautions, but now that I’m vaccinated, and most of our friends are too, it has been so energizing to see people, and get a sense of the scene here. I’m actually from Northern California. I went to undergrad at UC Santa Barbara and my best friend went to UCLA so I used to come down for weekends pretty often, and of course, during my time in NYC I’d come out at least a few times each year to songwrite, seeing friends, etc. So, all-in-all, the transition has been pretty much as expected, COVID aside. The impact of sunshine and warm weather cannot be understated for my mood and energy, huge difference! I really do miss the closeness of my friends in my Williamsburg neighborhood, though; meeting a stylist for a coffee, or a friend on a whim around the corner was just easier in New York! Here it feels like you can only do one main thing a day. But there seems to have been a big exodus among our friends out here over the last several years, so we have a built-in network of musicians. We actually took over a friend’s place here when they decided to move to Europe, so all-in-all, it’s been a very soft landing.

Izzy: Is there anything you’d like fans or potential fans to know about your aim as an artist, or your process of creating music?  Or is it all in the songs?

Jenna: I love that question. Well, each song is somewhat different for me, but there is always some initial spark of an idea that I build around; I’m very visual so a lot of the time that will be an image or a moving image that I picture and I come back to that image to keep writing from. Maybe it’s a blue butterfly that glows and is flying through a completely black environment. It’s not sad or dramatic, but there is exploration and longing. What is it trying to say? I’ll figure that out and I’ll lay down that piece in Ableton, and then I look back through my notebooks, grab lyric ideas from there, or pull from my Ableton libraries of sounds I’ve made, or saved voice memos. I’ll play lines on my Nord, or I got a fun little novation synth bass which sounds great. Like a puzzle it seems to come together. Lately a word in Portuguese or a phrase in Spanish that strikes me as having a different meaning than in English has been capturing me, along with driving beats that make me stop thinking so hard and feel the music. Really, I’m looking to create a space to let go, let the day-to-day recede into the background. It’s less about a story, and more about a vibe for me.

I collaborated with some amazing artists and friends for “Tell Me;” BAILE added his touch, Grant Zubritsky added this bass line that totally changed the track, which I just love. But since “Tell Me,” my process has been more solo; for example, I produced “Ojos” and “Abre La” (the other two songs on the EP) myself in my home studio. I always share with Bruno, and he usually has ideas for composition and structure, and then I bring him in to add organic drum and percussion layers over my electronic elements. Being back in California now, and having a car again, that’s the best way to listen back to my ideas while driving around.

Izzy: Your debut EP is set to drop this September, but you’ve been making music for quite some time now.  What would you consider to be some of the highlights of your musical career so far?

Jenna: Yeah, that’s right. I released my debut single, “Dust,” several years back now and I’d say I’ve just come a really long way since then, especially my confidence to say what I want to say, and my skills as a producer. But having Interview Mag debut “Dust,” and then getting that song picked up across a bunch of Spotify playlists was a really nice push of encouragement for my first go at it. But fan interactions are the most rewarding. Seeing people listen to my music during their daily lives is incredible. One woman in Buenos Aires was singing “Lovelorn” to her little baby girl, so cute! Also, I had a few dancers come up with routines to my songs, which is just amazing to see. I don’t think there’s anything more flattering than another person using your art to make their own thing, incorporating your vision into theirs and creating something from that.

Izzy: What can fans expect of Ojos?  How do you feel like it relates to previously released songs?

Jenna: Ojos is my most personal and raw collection yet. Exploring singing in Spanish was something I really hadn’t considered until last year. I’ve actually spoken Spanish since I was a little kid, and I got the chance to live with a family in Cordoba, Spain during college, and now with my partner at home and with his family and friends in South America, as well as my friends and other collaborators. There are some words that just sound better in Spanish or Portuguese at this point, so I’m allowing myself to just say them how the words come to me. Aside from the language, the production, especially for “Ojos” and “Abre La,” is a bit more experimental, and it’s just me, so I guess you can say I’m taking risks. Izzy: What would you currently consider to be your most significant influences, both musical and otherwise?

Jenna: James Blake is the person who inspired me most to pursue music. Hearing his combination of influences, the eclectic way he approached production, the song structure, and when I saw other people loved his music, I was hooked. Growing up, around the house it was Earth, Wind & Fire, Stevie Wonder, songs you can dance and sing to. I think I naturally write darker music because these emotions tend to overpower me, so I want to get those ideas out, but I want people to come to dance and have a good time, so I’m trying to strike a balance. I’m also really influenced by film and art and the ‘90s. I’m having a resurgence in a love for bright colors.

Izzy: You always seem to have really intricate music videos and I know you’ve worked in performance art, so I’m curious who some of your favorite visual artists are.  Are there any filmmakers or designers or anyone else in that category that you find especially inspiring, or that you just happen to be super into?

Jenna: Ah, it’s my blessing and curse. Coming from a background as a makeup artist as well as performance art, I worked with amazing photographers, editorial stylists, hair stylists, and shot concept dance films. What I love about music videos is it really pulls the concept together from all angles; the music, the visuals, the lighting, the space, the hair, makeup, movement, it’s all adding to the story. I love making videos! But I’m taking a bit of a pause now because I’m more focused on making new music, and also want to share bit more of myself less “decorated;” it’s more about who is Jenna Kyle, less about my access to top tier hair and makeup. But generally, I so respect and admire artists like Bjork or GRIMES for their multidisciplinary approach to their music. I love how Sofi Tukker integrated their midi tree on stage that added such a cool visual element.

From a different perspective, the way that David Lynch speaks about his art, and his drawing upon meditation really speaks to me and resonates with my own experiences. If you haven’t read his book, Catching the Big Fish, you need to! I’m also inspired by the freeform nature of electronic music and techno; it’s all about the peaks and valleys and that’s just pure emotion.  When I was performing with the performance art group Temporary Distortion, we had the chance to do a residency out at Robert Wilson’s watermill center, with the focus being durational performance art. What I love about this type of art is that, similar to being a musician on stage performing, it’s all encompassing, all senses are being used to their max capacities. So maybe all that comes together somehow?

Izzy: And how are you hoping and planning to spend the rest of 2021?  Is there anything you’re particularly excited about, in addition to your EP?

Jenna: Well, we are actually moving again within LA right now, so we’re going to be settling into our new home and we’re building out a very sweet music studio space here. As soon as we’re settled, I’m planning to lock myself in that studio and come out only to play with our puppy, Hugo, and try to get a little exercise, until my album is finished! I have some exciting collabs coming up as well, and can’t wait to release a remix for “Ojos” which my friend Sinego has just absolutely nailed. It’s like the sunrise beach organic house version of “Ojos,” super sexy. Being in LA now, so many of our friends are insane world class musicians so I’m trying to snag their time in the studio before they all hit the road again! And I’ll probably cave and film another intricate music video.